A Ring, a Park, and a Castle

Breakfast eaten and bags loaded, we set out for a long day of riding. 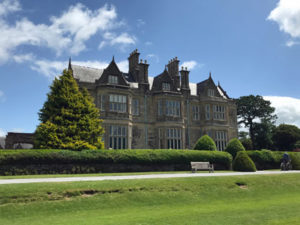 Muckross House, in Killarney, Co. Kerry, is a beautiful old mansion, carefully preserved in period style. After touring the house, we explored some of the gardens, then had lunch in the Garden Restaurant and explored the Mucros Craft Shop, where I bought a scarf. I would have loved to have taken home some Mucros Pottery, but, again, no room in the suitcase.

Paddy took us into Killarney to the Arbutus Hotel, where we were able to check into our rooms. A number of us then went on a Jaunting Car ride through the Killarney National Park. This activity was on a list of “Ali’s Faves” that she put together for us. These are excursions that are not part of the Go Ahead package, but can be chosen at the discretion of the tour director for us to experience. We decided at the last minute that we wanted to take the ride, and I was so glad we did.

Both the house and the park reminded me so much of the Biltmore House estate in Asheville, NC, both in the care that has been taken to preserve the house, and in the size and beauty of the park. Killarney National Park was the first national park in Ireland, created when Muckross Estate was donated to the Irish Free State in 1932. It currently encompasses over 25,000 acres of lakes and woods. 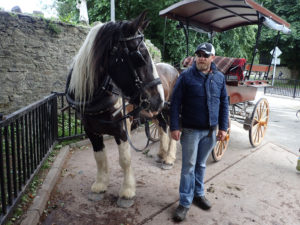 Jeremiah, our jaunting car driver, and Sam, his horse, took us along paths through the woods with beautiful views of the lakes that are part of the park. We saw does and fawns at a distance, and could see much evidence of the effort to prevent rhododendrons from taking over the forest. The drive was peaceful and a perfect end to our sightseeing day.

Once back in the room and settled in a little, the Jazzman and I went with Mike & Marilyn nextdoor to Murphy’s Pub for drinks, then decided to just eat there and sneak peeks at the World Cup playing on the television overhead. Afterward, we walked several blocks into the shopping district of Killarney and window-shopped, then stopped in Courtney’s for another drink.

When we arrived back at the Arbutus Hotel, we stopped in at Buckley’s Bar to check out the action. One of the ladies from the tour asked if we’d like to play cards, and Marilyn and I joined several other tourmates for a game of Five Crowns, which I enjoyed enormously. And I was the winner, with a score of 214. Oh, wait. The winning score is 0. I guess I was the top loser. Great fun—I must find people at home with whom I can play cards. 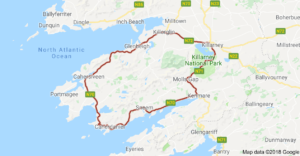 The Ring of Kerry is a 112-mile coastal route that uncovers so many beautiful vistas for tourists. (Five must-see views.)

Shortly into the ring, we stopped and were able to watch a sheep dog exhibition featuring the Irish National sheep herding champion. I had seen a similar exhibition at the Maryland Sheep & Wool Festival when I lived in Washington, D.C. I absolutely love seeing the speed and agility that the sheep dogs show when herding the sheep.

Video of one of the two sheepdogs herding the sheep from the top of the field down to the demonstration arena. I love that Thomas is totally ignoring the bird crossing the field just above him.
(The extra voice you hear is a German translator.)

We continued around the ring, stopping occasionally to stretch our legs or for a photo opportunity. We stopped briefly in the small coastal town of Waterville, which was a favorite of Charlie Chaplin. A little farther on, we stopped at Coomakesta Pass, at 700 ft. elevation the highest point on the ring, to take in the incredible views. Our lunch was at the Scarriff Inn, known for “Ireland’s Best Known View (Fog Permitting).” Soon we were in the Killarney National Park again, and stopped for photos at Ladies’ View. Stunning views!

Group dinner at Arbutus that night, and more packing.