Horses and Rocks and a Ship That Struck an Iceberg 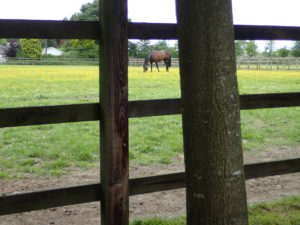 The only hardship of this tour was changing hotels every other day. Before going to bed on Monday night, we repacked our bags. Then in the morning, we threw the last minute things in and had them outside our hotel room doors at 7:30, with breakfast eaten and bodies in the coach by 8:30.

Our first stop of the day was the Irish National Stud Farm and Gardens in County Kildare. Beautiful champion horses, beautiful grounds. The farm was a lovely place to visit. I had read an Ireland guidebook that downplayed the Japanese Gardens, saying they were nothing special. Ooh, I disagreed. I enjoyed every part of this day.

Leaving Tully, Co. Kildare, our next stop would be the Rock of Cashel. But before touring the ruins of this old church, we had lunch at the Rock House Restaurant. The owners have fast service down to a science. The Rock of Cashel is a stop on many Southern Ireland bus tours. Tour directors make their reservations far in advance and stick to the schedule religiously. The food is tasty, reasonably priced, and tour groups are in and out in a flash. Fancy, it’s not; good, it is. And after I enjoyed a delicious plate of Shepherd’s Pie, we were off for the day’s history lesson. 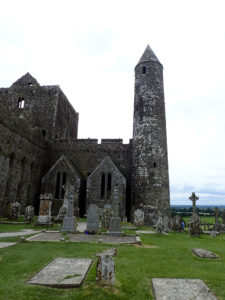 The Rock of Cashel, part of which dates from the 12th century, is a spectacular group of Medieval buildings set on an outcrop of limestone. One building, Cormac’s Chapel, has recently undergone conservation—not renovation—and, according to our guide, Bill, is pretty much as it was in the 12th century. The stones are the original sandstone and are beautiful.

I also enjoyed seeing the cemetery at the church. There are very old and rather new graves existing there. I would love to know when the oldest grave there dates from. I guess I need to find a copy of “Our People are on the Rock,” compiled by Tom Wood and Cecile Huftier, which details graves at the Cashel cemetery.

You might enjoy this blog post about the Rock of Cashel, from author Ed Hannon, along with the accompanying photos. And one more piece—Why You Need to Visit Ireland’s Popular Rock of Cashel—from the website, “As We See It.” Note from that piece regarding who can be buried in Cashel: “According to our guide, the cemetery is out of room. Now, you can only be buried there if you are a direct relative (child, parent, brother or sister) of someone who is already buried there.”

One last fact—or maybe fiction—about the Rock of Cashel. Arthur Price (1678 or 1679 – 1752), who was the Church of Ireland Archbishop of Cashel from 1744 to his death in 1752, was either the grandfather of Richard Guinness and great-grandfather of Arthur Guinness, or the employer of Richard. In any event, he bequeathed £100 each to Richard and Arthur. Richard is reported to have set up a brewery in 1755 and bought another brewery in Dublin in 1759 on the site of the current Guinness brewery. It is said that the first glass of Guinness was poured in Cashel. Here’s the background on that story.

After our visit to Cashel, we headed to our hotel in the village of Macroom, a few miles northwest of the city of Cork. The Castle Hotel in Macroom is a boutique, family-owned hotel that has been in the Buckley family for over 65 years. It’s a charming cluster of buildings that have been cobbled together and modernized, receiving quite a range of TripAdvisor awards along the way. The customer service is top-notch.

This was a group dinner night, and I enjoyed fried brie and fruit compote; potato and leek soup; roast beef with veggies, mashed potatoes, and potatoes au gratin; and the choice of cheesecake or brownie with hot fudge sauce for dessert. (I think that, given Ireland’s history, one can never have too many potatoes.)

The breakfasts at the Castle Hotel were different from the previous hotel only in that the hot food was a la carte and cooked to order. The cereals, breads, fruit, and so forth were essentially the same as the Temple Bar Hotel. 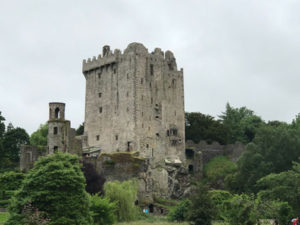 After breakfast we headed out to kiss a stone—the Blarney stone. Mike and the Jazzman climbed the steps to the top of Blarney Castle, but skipped the kissing part. Marilyn and I stayed down at ground level and started exploring the gardens. After half an hour, the guys reappeared. We were joined by one of our tour mates, Brenda, and walked around the Rock Close, part of the Forest Trail Route. The gardens at the Castle were stunning. I can’t even imagine the size of the landscaping crew they have. Even if you have no interest in climbing to the top of the castle or kissing the stone, absolutely go visit the castle just to walk around the gardens. You will thank me for this suggestion!

There’s a Blarney Woolen Mills store adjacent to the castle property, and every item I saw or touched in this store was of the highest quality. They carry Waterford crystal, Aran sweaters, beautifully embroidered linens, yarn for knitting, Irish jewelry, the obligatory Irish tchotchkes, hats, and household items. There’s an excellent cafeteria in an adjoining building. We had an hour for lunch and shopping. I was tempted by so many items. But thanks to my having brought only a carry-on size suitcase for the trip, I could remind myself that I had no room for any take-home goodies.

Promptly at 1:00 we were back on the bus, as we had more history to walk through.

Paddy drove us around and through the town of Cork, which looked like it would be a fun place to spend a few days. And then we went out along the harbor to Cobh. 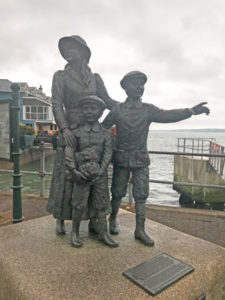 Annie Moore, with her two young brothers. A Cobh native, Annie was the first new arrival to process through Ellis Island.

The village of Cobh (pronounced “cove”) was important in the history of Irish emigrants, as it was the last stop of many ships as the emigrants left to chase their dreams in America. Cobh has a natural deep-water harbor, so large ships can access that port over many other ports in the country. The most notorious ship that took on passengers in Cobh was the Titanic.

The Cobh Heritage Centre assigns to each visitor the identity of an emigrant who walked across the docks of Cobh, or Queenstown, as it was known in those days. As you pass through the exhibitions in the history center, you learn the stories of the identity you are carrying. There are relics from the Titanic and the Lusitania, and lifesize sets depicting life on board the ships.

After touring the center, a dozen or more of us chose to go on a heritage walking tour of Cobh with Titanic scholar, Dr. Michael Martin. Dr. Martin’s well-founded assertion, based on years of research, is two-fold: the “women and children first” standard was not followed, preferring first- and second-class passengers to steerage passengers, and allowing seats in the lifeboats to go empty rather than fill them with steerage passengers; and that there simply were not enough lifeboats for the number of passengers and crew on the ship. If you’re interested in learning more, Dr. Martin has published several books that are available on his website, and has another book in the works. The Jazzman bought one of his books, and we’re both looking forward to reading it.

Dinner that night was on our own. The four of us went downstairs to Dan Buckley’s Bar for drinks, and decided to stay for dinner. I can’t tell you what I ate for dinner, but I can tell you we shared a delicious apple pie with vanilla ice cream for dinner. Now you know what’s important to me!

And again we were packing up our bags for another transfer.