For Gifts and For Me 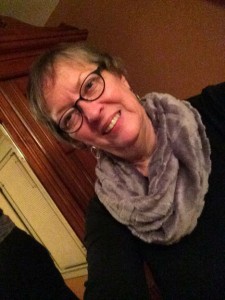 One morning about two weeks before Christmas, I walked into the Bernina store where I work and noticed several women lined up holding bolts of Shannon Cuddle, a microfiber fleece. (Here are some examples of this fabric: 1; 2; 3.) Benartex makes a similar fabric named Minkee. I believe Minkee has been around longer and is more well known. The variety of microfiber fleece that people are most familiar with is the dimpled version, frequently used in making baby blankets. 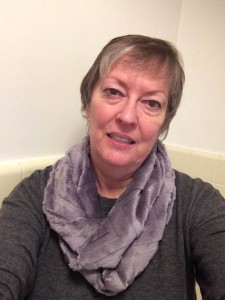 My coworker had seen a video for an infinity scarf over the weekend and made one out of Cuddle. It was so beautiful that everyone in the store wanted one for herself and one for her best friend.

The video linked above shows the scarf made out of a lightweight wool and in greater dimensions. My coworker had modified the instructions just a little, but the scarves were perfect in the Cuddle.

Here are the changes: instead of cutting 30″ x [width of fabric], just cut ⅓ yard (12″) and sew as shown. After turning right side out, hold one end flat, grab the other end and turn it over three times (effectively giving it a full 1½ turn – 180° + 180° + 180° – does that make sense?). Then, instead of trying to sew around the cut edges right sides together, fold one end to the inside ½” to ¾”, then tuck the other end inside that fold, making a full circle, and topstitch. The fleece has just the right about of thickness to its nap that you’ll never see the stitching, especially if you double (or even triple) the scarf around your neck. 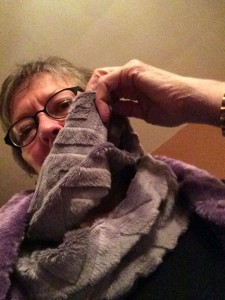 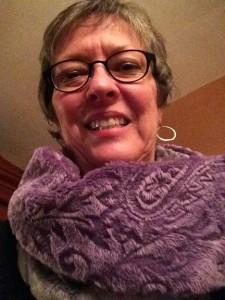 I made five of these for Christmas gifts (reserving one for myself, of course). The first three, two in ivory embossed vine and one in charcoal embossed chevron, were cut at 12″, so when worn are 5½” wide (12″ – ½+½ seam allowance = 11″ folded in half).

At the end of the day in the store, there was only a generous half yard left of the violet embossed paisley, so I put that on my account, cut it in half, and it became two young-lady-sized scarves.

You want to see one on a little sweetie, don’t you?
(My younger son’s partner’s precious 4yo daughter, the lovely Miss C.) 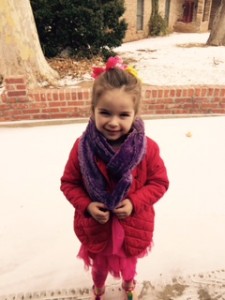 One Response to For Gifts and For Me