Does a Manly Man Wear a Scarf?

As we were leaving Northern California after a wonderful week of vacation in September, I ducked into a yarn shop in Half Moon Bay and picked up two skeins of Noro “Cash Island” yarn (also called “Cashmere Island”). As I was writing this post, I learned it has been discontinued. Boo hoo! It’s a great yarn. I wanted to make more of these scarves. “Cash Island” is 60% wool, 30% cashmere, and 10% nylon. Can you say “soft”? Yep, soft.

When I showed it to Jas after purchase, he asked, “Don’t you have enough scarves?” I didn’t tell him it was designated for his neck, not mine. I waited until I was about 3/4 finished with the knitting and able to say, “Touch this. Isn’t it nice?”

The pattern was free with purchase. It’s called “Basketweave Scarf” and was designed for “Cash Island”. So simple – 26 stitches, some seed stitch then a k4/p4 basketweave, finished with a little seed stitch. That’s as close as I’m going to get to violating Fengari’s copyright. The lawyer inside won’t let me get any closer. The scarf uses 2 skeins of the yarn and size 10 needles. As I hadn’t taken any needles along on vacation, I picked up a pair of Crystal Palace size 10, 26″ circs on the store owner’s recommendation. Totally love these needles, even though I had vowed never to buy bamboo before ’cause I just didn’t love them. These are different!

Here’s the shop’s website.
Here’s a “Cash Island” listing on Etsy. I believe this is the same colorway I used. Watch Etsy and eBay if you want to get some of this yummy wool. 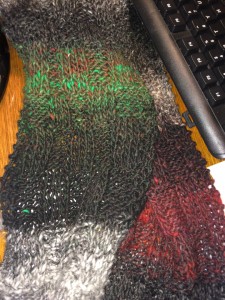 You love the picture of my manly man posing at his desk, don’t you. When we left yesterday morning to run down to Columbus for a late Thanksgiving celebration with his mom and brothers and their families, he grabbed the scarf. When we got home an hour ago, he folded it carefully and put it on the coat closet shelf. I told him I wanted a picture, and he quickly replied, “People don’t wear scarves indoors.” “Girls do,” I responded. “Men don’t,” was his immediate, firm comeback.

So he wouldn’t pose for a portrait like I would had I been wearing the scarf. He had to sit at his desk and pretend to be working. Haha. Didn’t fool you, did he?!

And—by the way—it would make a fine scarf for a girly girl, also.

3 Responses to Does a Manly Man Wear a Scarf?