And How Do You Feel About That? 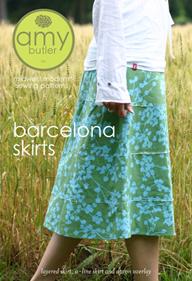 I’m currently having my first experience with on-demand sewing. The Bernina store owner came to me one afternoon about three weeks ago, carrying a pattern and three bolts of fabric. She said, “Why don’t you make this skirt and overskirt (referred to in the pattern as an ‘apron overlay’) so we can display it at the store to help sell some of these patterns.”

I’m not going to try to convince you that I have a definite style. My style is all over the place! But if you look at my Pinterest boards or if you’ve read a lot of my blog posts and examined the garments I’ve made for myself, you know I’m all about soft, flattering tops, leggings or slim pants, and hiding that excess ten [cough! cough!] pounds.

The fabrics I love have movement and are usually knits or silks. Think drape-y fabrics. This pattern and its recommended fabrics are nothing like that! The fabrics are quilting cottons. The skirt’s layers have frayed edges. It’s “shabby chic.” I may attempt to be chic, but shabby I ain’t!

And I’m always up to a challenge.

I have finished the skirt. I have washed and dried it twice and pressed it. With its layers of frayed edges, it’s ready to go back to the store for display. The skirt overlay—designed to be worn over the skirt or over a pair of jeans (!) is 20 minutes from completion. And that’s where we come to today’s post. 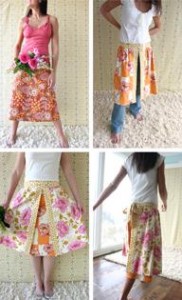 Last night I was clearing things off TiVo while pinning the overlay skirt panels to the waistband. I had sewn one edge, finished the ends, and was down to the final step of pinning the folded edge of the waistband facing to the inside for stitching. Things were not going well.

Even though the waistband was a rectangle, and the outside edge had sewn cleanly onto the gathered edge of the skirt overlay, the facing was acting like it was too small. I spent probably close to half-an-hour pushing and pinching and easing, trying to get the waistband facing to a point where I could handsew it into place before topstitching.

Are you kidding me?!

That instruction, my friends, is a catastrophe and a lot of seam-ripping waiting to happen!

Soooo, I coaxed the facing into place, pinned to within an inch of its life, and this morning I will handsew the edge into place, after which I will topstitch it ⅛” from the edge. And then I’ll be done.

I sat on the couch, after finishing the half-hour of coaxing and pinning, and I realized I was feeling something. I just wasn’t sure of the name of that something. Depression? Sadness? Frustration? Failure?

And I realized I had felt that feeling—I think its name is frustration—many times before.

I’ve never recognized or tried to identify that feeling before. But here’s what it’s all about.

I’m quick to try new things. New techniques, new patterns, new fabrics. And I always think I’ll be successful. It never occurs to me that I might proceed with caution. It never occurs to me that the finished product will be anything other than a fabulous garment which I’ll immediately don and feel like a million bucks. So when something happens to twist my universe—something between opening out the pattern and laying it on the fabric and the final stitch and press—I am at first shocked, which is quickly followed by a feeling of sadness that I’ve put so much time, energy, and money into something that was nothing like I’d expected. (Here’s a good example of just such a colossal failure.) At times I feel like such a failure I want to completely give up on sewing and just spend my days reading books.

I think it just doesn’t fit into my view of myself: I’ve been sewing for over 50 years. How could I make that colossal an error/goof/misjudgment?

Maybe with years of experience comes the knowledge of what works and what doesn’t work. But in the case of this waistband, that’s a fabric failure or a pattern failure, over which I have no control.

I have no clever sum-it-all-up paragraph to pen (pixel?) here. And actually, I’m quite surprised I only just recognized that I have had this feeling over and over again. I never thought of myself as a slow learner, but on this issue, I guess I am.

In a couple of weeks (post much-needed vaction), I’ll write a review of this pattern. It’s actually a decent pattern. It’s cute if shabby chic is your style. It’s just not mine.

But this is not about me.

3 Responses to And How Do You Feel About That?