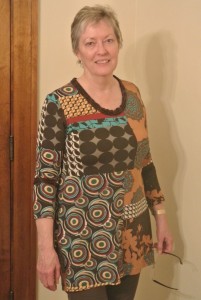 I was bored early one morning before leaving for France, and started exploring Mood Fabrics’ website while lying in bed, waiting for the Jazzman to wake up. Bad move. I found several things I had to have.

This one is called “Bright Multi Geometric Jersey Prints” and is a whole bunch of colors that look good on me. 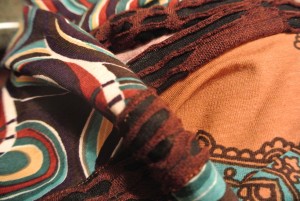 I knew I would use it for one of Marcy Tilton’s or Katherine Tilton’s tops they’ve designed for Vogue Patterns. So I wanted a complementary fabric to bind the neckline. Lookee here! The photo doesn’t do it justice. Look at how look it looks used to wrap the neck edge and ring the sleeves! That, my friends, is cool! 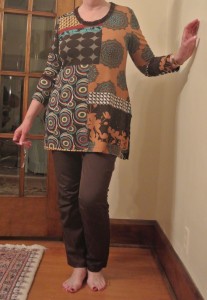 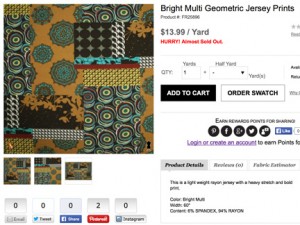 I decided to make Marcy Tilton’s Vogue 8582, which you saw previously described here, along with the brown pants described in that same post.

The thing I love about how this pattern merged with the fabric is the seeming under-bust seam. The way the pattern drapes is, in my opinion, very flattering to my figure. And of course I love that!!

The top took about 4 hours, start-to-finish, to make. And this great new outfit is going into my suitcase for my quick trip to NC to help celebrate my mother’s 100th birthday.

Sidebar: Got a haircut today. And notice the pretty toenails in the picture. My brothers and I are hosting brunch on Sunday. In attendance will be: my mother’s best friend’s daughter, who was like my little sister as we were growing up; my daddy’s associate in his medical practice (He’s 85 now. That means he was about 33 when I first met him!); the friend across the lake my brothers used to waterski with; the mechanic who souped up my older brother’s race car, a ’56 Chevy, with which he won hundreds of drag race trophies; and on and on. People I’ve known since I was 5 years old or so.

My sister-in-law planned the whole event. I owe her, big time!

I think I’ll wear this to brunch.