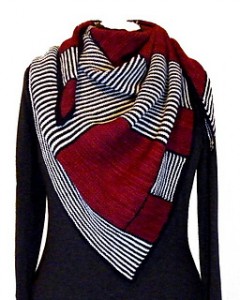 Late last summer I saw a picture of a stunning geometric handknit scarf on Facebook. A few weeks later I realized I had to resign from the Cleveland Orchestra Chorus because of work conflicts. I wanted a special gift for our assistant director, a beautiful and very talented young woman named Lisa Wong. Lisa’s wardrobe is filled with black, which she accents deftly with grays and occasional pops of color. She is chic to the Nth degree. When I had first seen the scarf picture, I instantly thought of Lisa and how wonderful this scarf would look on her. On my last night at rehearsal, I showed her the picture and asked if she thought she’d prefer red or purple for the accent color. We agreed on purple and I ordered the yarn—Malabrigo Sock yarn, soft and cuddley.

Throughout a busy fall and winter (new job at the Bernina store; musical directing Sondheim’s “Company”; vacation in Florida; moving Mother into a nursing home and emptying her assisted living apartment; helping my son clean out his house after his ex moved out; and taking on a new opera gig), I did my best to make time to knit. The Jazzman likes to watch news shows when he gets home each evening after a long day on the railroad, so I used that time to sit with him and work on the scarf.

The pattern was complex and moderately difficult. Some of the techniques were new to me. The instructions were—to this technical writer—imperfect. As I worked through the pattern, I found little boo-boos that were too far back for me to be willing to fix. I have my limits! 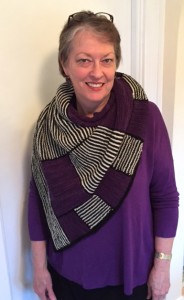 When I was about three-quarters of the way through the scarf, I realized I had made a major error: two adjacent striped squares were parallel rather than perpendicular. And then on one of the purple squares I realized I had slipped a stitch, creating a hole. Argh! I left a note to Lisa on Facebook telling her the scarf was going to come to her next fall—just as the cold weather is beginning again—rather than at the supposed end of this long and bitter winter. This one would be for me to wear with a purple Eileen Fisher sweater that was a gift from my DIL-Equivalent.

So here’s today’s premier wearing, just an hour after finishing. Tonight the Jazzman and I went to a fundraiser for my neighbor’s non-profit, and several people noticed and admired the scarf. Isn’t that always the best way to end a project?!

Knitting geekery. If you’re not a knitter, you can skip this paragraph!
For anyone working on this pattern, here are my clarifications to the less-than-perfect instructions:

Honestly, I’m happy this first version is finished. I will keep both the instructions and version #1 next to me while working on version #2.

And the bottom line? I love it! The yarn is just lovely. This will be worn each time I wear the purple EF sweater.

5 Responses to Love Potion No. IX